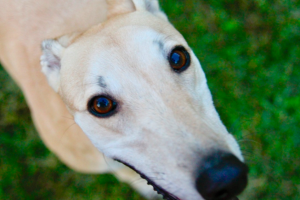 As we move closer to the new year, I wanted to send a note of thanks from the Brave Tide family for your support throughout 2016 and provide an update on one of our Brave Tide ambassadors. Transporting animals over great distances by air is a complex undertaking that is made much easier with the support of so many caring individuals, families, and animal welfare groups. From words of encouragement to flight sponsorships, every contribution is appreciated!

Our family adopted London the greyhound in 2009 after she was bounced from her first adoptive home. A change of scenery seemed to do the trick as London quickly became part of our family. She was joined a year later by Lily the greyhound. Our two retired racing greyhounds enjoyed running around the fenced-in yard, family walks, playing in the snow, snuggling on their dog beds, and trips to the beach for many years. As London got closer to her 11th birthday, she began to slow down just a bit. In late October there was a sudden limp and signs of discomfort. X-rays revealed cancer, and we are sad to share that London passed away a few weeks ago. London is sorely missed, but she is a big reason Brave Tide exists today. Having her in our lives for so many years was truly a blessing.

We hope you all have a wonderful holiday season, and we look forward to big things to come in 2017. Thank you!

Posted in Uncategorized | No Comments »